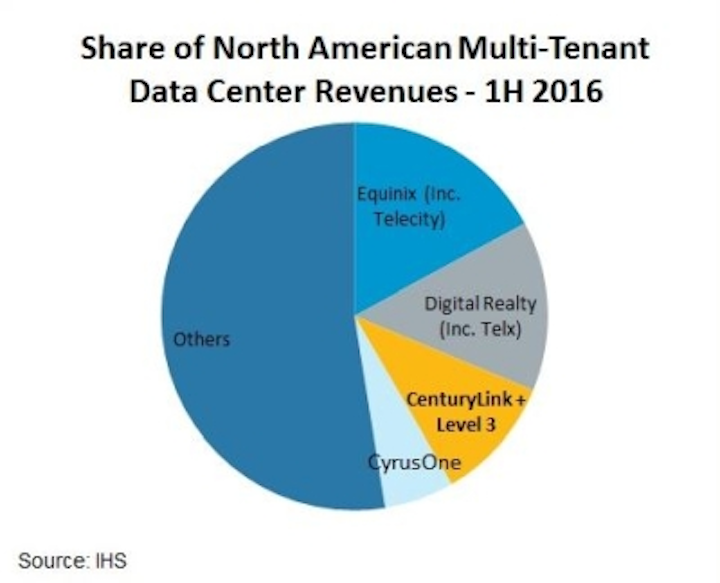 On the day CenturyLink announced its plans to acquire level 3 Communications for approximately $25 billion plus debt, Liz Cruz—associate director of data centers, cloud and IT infrastructure with IHS Market—analyzed what the acquisition will mean and could mean for Century Link’s colocation data center business. “This acquisition would nearly double CenturyLink’s share of the colocation market from 6 percent of North American revenues to just over 100 percent,” she wrote on October 31. IHS Markit produced the graph that appears on this page showing colocation data center market share.

“CenturyLink currently operates nearly 60 data centers worldwide and has been actively looking for buyers of the business for nearly a year,” Cruz explained. “Last month, the company said it was ‘exploring a full range of options including, but not limited to, a partnership or joint venture, a sales of all or a portion of the data centers, as well as keeping these assets as part of CenturyLink’s portfolio.’ This does not necessarily mean that CenturyLink will cease offering colocation services, but it may choose to lease back the data centers in which those colocation services are provided—which is not an uncommon practice.”

Further, Cruz noted, the real question is how soon CenturyLink’s executives will “begin reevaluating the colocation business of Level 3?” She said it “made sense for CenturyLink to stop investing capital in its own colocation business—a segment that has seen relatively flat growth in the last year. However, Level 3’s colocation business has been performing better as of late, with second-quarter colocation and data center service revenue growing 12 percent over the previous quarter. Thus, deciding what to do with Level 3’s data centers with colocation space might be a tougher call. Not to be overlooked is the fact that telecom companies may find it difficult to succeed in the colocation market (a real-estate-focused industry) against increasing competition from REIT [real estate investment trust] giants like Equinix, Digital Realty, and CyrusOne.

CenturyLink’s chief executive officer Glen Post boasted that the combined company “will have one of the most robust fiber network and high-speed data services companies in the world,” when the acquisition was announced. Cruz noted: “This is critically important in today’s colocation industry, which is increasingly driven and impacted by the ability to interconnect networks, service providers, and enterprise customers,” Cruz said. “Though these companies may find themselves looking to outsource the actual ownership of their data centers, there is likely a lot to be gained by offering retail colocation in a leaseback scenario.”