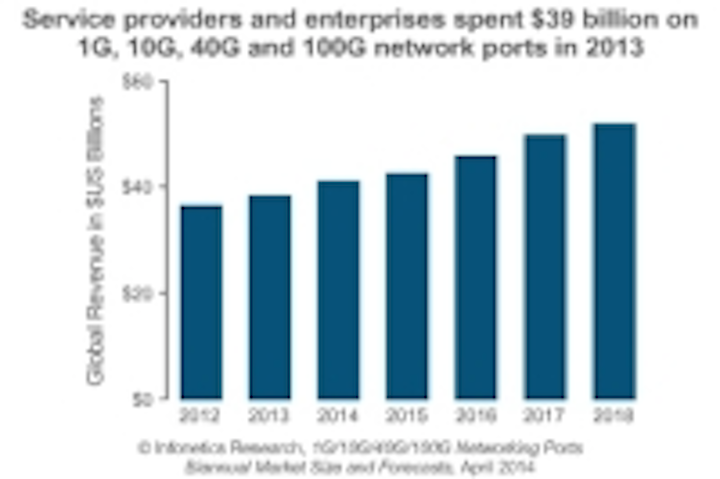 Infonetics Research has released its latest 1G/10G/40G/100G Networking Ports report, which explores the demand for 1 Gigabit, 10 Gigabit, 40 Gigabit, and 100 Gigabit optical and Ethernet ports, the size of the market and how fast each segment is growing, and which technologies and speeds are being adopted on various types of enterprise and service provider equipment.

According to the report, worldwide 1G/10G/40G/100G network port revenue grew 5% in 2013 from the prior year, to $39 billion. Enterprise port revenue grew 5%, and service provider port revenue increased 4%. Infonetics states that 1G comprises the lion’s share of ports, and that while 10G delivers the bulk of revenue, the main revenue growth is coming from the emerging 40G and 100G segments.

“Deployments of 1G, 10G, 40G, and 100G ports once again grew significantly in 2013, as enterprises and service providers invested in their networks to accommodate the growth in traffic, and revenue growth accelerated as buyers shifted to higher bandwidth -- and more expensive -- ports,” explains Matthias Machowinski, directing analyst for enterprise networks and video at Infonetics Research.

The analysis finds the 40G market in transition as service providers move on to 100G. However, 40G is shown to be finding success in the data center market, resulting in 40G port shipments more than doubling in 2013. Infonetics looks for 40G port shipments to nearly triple this year, hitting 1.5 million.

The report also finds that sales of 100G ports almost quadrupled in 2013, thanks to surging service provider demand for 100G WDM. The first 100G ports on enterprise equipment started shipping in 2013, but aren’t expected to become a major factor until 2015, notes the data.

“Coherent 100G is well on its way to completely taking over the core, growing to nearly 80% of all wavelengths by 2016, effectively shutting down competing 10G and 40G deployments,” adds Andrew Schmitt, principal analyst for optical at Infonetics and co-author of the report.