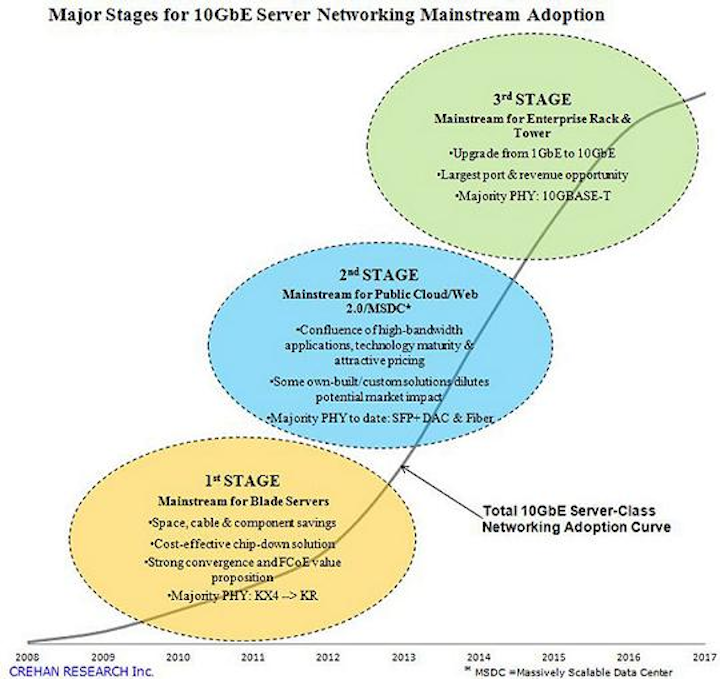 "Although there is some overlap in terms of timelines and segments, we believe that we are now in the second of three major adoption stages that 10GbE server networking will follow," says Seamus Crehan , president of Crehan Research. "Each stage has distinct characteristics, resulting in correspondingly different and significant market changes and vendor impact. In the current stage, vendors stronger in the cloud segment are likely to gain market share."

As illustrated by the above graphic, Crehan sees the three major stages of 10GbE mainstream server networking adoption as follows:

First Stage: The majority of the transition during this stage happens in the 2009-2013 timeframe and mostly involves blade servers. It is driven by factors such as:

-- The space, cable and component savings that 10-GbE can deliver in comparison with multiple 1-GbE and Fibre Channel connections, which is very important for space-constrained blade server enclosures.

-- A cost-effective chip-down LOM solution using Backplane Ethernet, hence the popularity of 10GBase-KX4 and subsequently 10GBase-KR PHYs during this stage.

-- During this stage there is also some adoption of 10-GbE for server access within the high performance networking and low-latency segments (for example, high frequency trading), some large cloud providers, and some enterprises. However, each of these 10-GbE segments is smaller than the 10-GbE blade server segment during this timeframe

Second Stage: This stage, which Crehan considers to be the current one, mostly involves public cloud and massively scalable data center companies. Although there have already been some early adopters of 10-GbE server and server-access switches within this segment, the confluence of high-bandwidth applications, technology maturity and attractive pricing are now leading to increased deployments, says the researcher. While the propensity and ability of a number of cloud providers to build some of their own custom solutions dilutes the potential market impact, data centers in this segment can be so large that even a single customer deployment can have a noticeable market impact. So far, the main 10-GbE port interface type here is SFP+, according to Crehan.

Third Stage: This stage is characterized by the upgrading of the traditional enterprise segment's large installed base of rack and tower server ports from 1-GbE to 10-GbE. Crehan expects this stage to gain good traction in 2013. Since much of the infrastructure in this segment is 1GBase-T, Crehan forecasts that this is where 10GBase-T will start to see mainstream adoption, and it predicts strong growth for this technology. Crehan also anticipates that this stage will offer the largest server-access port and revenue opportunity.

Crehan Research ultimately expects that server networking bandwidth will see a five-fold increase over the next five years as the industry moves through these upgrade stages.