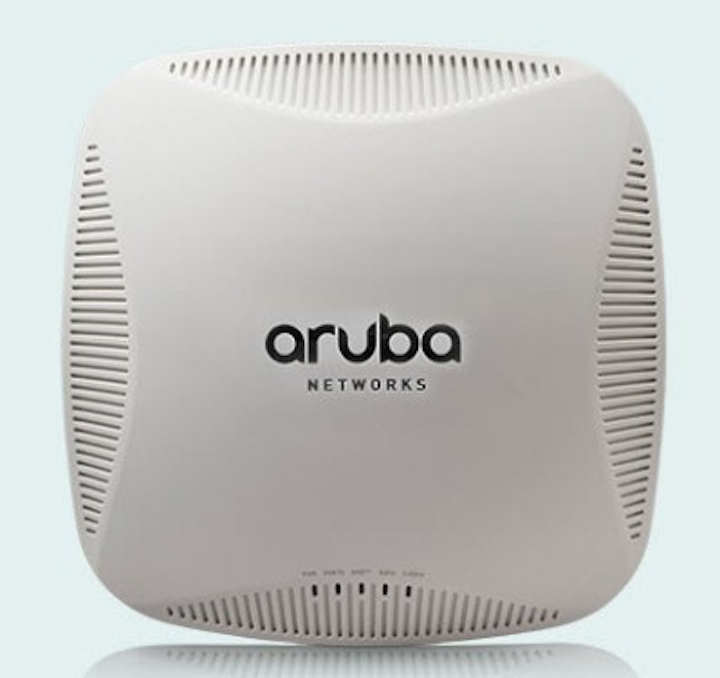 Shown here is Aruba Networks' 220 Series 802.11ac access point. This and all of Aruba's wireless LAN equipment will become part of HP's Enterprise Group upon completion of HP's $2.7-billion acquisition of Aruba, which was announced on March 2.

Evidently, acquisitions valued near $3 billion are becoming commonplace in the cabling industry and those of the applications that cabling serves. First CommScope and TE Connectivity announced the impending acquisition of TE by CommScope. Then, in the network security space, Canon’s overture to Axis Communications was unanimously accepted by Axis’s board. Now, 802.11-based wireless LAN technology provider Aruba Networks is being acquired by HP in a deal the companies say has an “equity value” of $3 billion and “net of cash and debt approximately $2.7 billion.” The deal was announced by both companies Monday, March 2.

Aruba, with approximately 1,800 employees, had revenues of $729 million in its fiscal year 2014, the companies’ announcement said, adding that Aruba has enjoyed a compound-annual growth rate of 30 percent for the past five years.

The announcement further observed, “With the shift to mobile, enterprise networking needs are exceeding the capabilities of legacy infrastructure. At the same time, organizations are shifting rapidly to mobility-centric workplaces for their employees, guests, customers and students. The next-generation 802.11ac WiFi standard is critical in enabling this trend. This new technology will support the faster speeds and access to cloud applications that end-users expect. Enterprises need comprehensive, integrated and secure networking solutions to help them transition legacy systems to the wireless age. Today’s announcement directly addresses these market trends.”

The companies said they expect the transaction to close in the second half of HP’s fiscal year 2015.